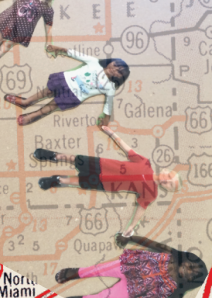 When I am wrestling with an idea or concept, coming up with an analogy seems to help me understand and move forward. As many of you know, the continuing contemplation for me over the past 2 years has been creating and reflecting upon what I imagine as a modern, flexible and innovative learning environment for 7 year olds. Countless hours have been spent, alone and with others–thinking: making charts of then and now, picking apart those “wow” times, and replaying the reflect-redo button over and over again.

Yesterday, an analogy came to me. One that will stick and guide me through my practice this year–I just know when a WOW idea hits, it is adrenaline. It’s like when Elvis died, I won’t forget where I was….okay, if you want to know, it was standing in line at the Starbucks on Parker Road.

Maps. Yes, that is it. (NOT to be confused with the assessment, please.)

Creating the 21st Century Classroom which is best for the learner of today and the FUTURE world contributor of tomorrow is like a map with many trails.

When I want to explore the beautiful state of Colorado, I usually have a goal in mind, a mountaintop, a breathtaking waterfall, or just the hope of exhilaration. I have resources here at home–books, internet–some trails look very difficult: some easy, some winding and some a straight shot. Others will not choose the same trail that I do, and it is great that I can find what works for me. I sometimes talk to my friends and family about the trails that they have chosen. I will refer to my map during my journey, that guide with directive purpose which will help me get there. When I begin my journey, I will stop every now and then and look at the mile markers, to see how I am doing, check my watch and have water and a snack. I might go faster than my group, but that is okay. Some days, I might go slower than others. Sometimes I will walk alone.  There might be days that I take the wrong trail. Most importantly, I can do all of this because I have had to learn how to read a map, and I have had to practice before I going out alone. Because of practice and reflection, I am good at it now, and I wonder if I could blaze my own trail someday!

So, most likely, my AMAZING reader, you have figured out the analogy. Primary students are learning about maps. The “map” is that illusive and yummy world of choice and personalized learning. However, young students (little kids) will walk around in circles unless someone (coach/mentor/teacher) helps them learn how to read the map and how to stop and assess their way at the mile-markers, not a dictator who makes everyone take the same trail.

Many primary teachers use the phrase, “It is like herding cats!!!”  Yes, this is true, and the cats will go nowhere until they are given the necessary tools to be the future inventors, collaborators, creatives, and givers of tomorrow. Primary teachers know this, we are the gentle tour guides.

As a teacher and after many journeys and experiences–using great maps, it is my goal to create curious humans who, someday, will blaze the trails and make new maps.

Some Nuts and Bolts as I start a new year in the Primary Innovation Studio these days:

For next week, I have some ideas:

So, as you are starting your year in the hope of busting down the walls of teacher boss, remember that when they are young, we still have to guide them and teach them how to read maps. They will find the trails that fit their journeys and you will too.

I am thrilled that my colleague and friend, Ed Goulart, has agreed to contribute to the Primary Innovation Studio Blog. Ed encapsulates the kind of coach/facilitator and teacher that students need today. He incorporates a healthy blend of joy, creativity, and expertise into his classroom. Ed is one of those colleagues who supports and challenges me throughout the school year. Tony Wagner asserted the importance of play in his recent book, Play, Passion and Purpose, and it dawns on me that educators need permission to use the word PLAY with purpose and confidence. Thanks again, Ed! 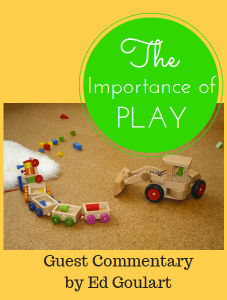 “Do not keep children to their studies by compulsion but by play.” Plato

Recently, I have found myself thinking quite a bit about the role and the experience of play in the lives of the children I teach. It started with an idea for a song I wrote. As often happens, once I’d started thinking about the importance of play, I began to run across articles and other writings about it. Of course, the topic came up again and again in conversations with different colleagues. Mary Lisa was one of those colleagues, and she asked if I’d write this blog entry. So, I Googled the words “play” and “learning”, looking for quotes and thoughts that might motivate and inspire me. The following are my thoughts.

Watch a child at play. What do you observe? Total concentration. Absolute engagement. Imagination, perseverance and resilience. Roles arise from deep within the imagination. Perhaps the child is replaying a favorite book or movie. Or maybe he is pretending to be an animal. Or an alien. Problems and challenges arise, are confronted and resolved, only to be replaced with new challenges. Often, the role a child chooses to play is that of a real-world person: a mom, dad, teacher or police officer. The child, through play, is exploring the options and constructing the person he will someday become. Despite the importance of play to the future man, however, play is crucial and vital to the person that the child is today.

“In play, a child always behaves beyond his average age, above his daily behavior. In play, it is as though he were a head taller than himself.”  Lev Vygotsky

The desire, even need, to play is hard wired into children. It is critical to their development as human beings. And it should never be diminished. Time to play is every bit as critical to a child as any endeavor that might be identified in adults. Through play, children discover reality. They begin as individuals, alone in their own little worlds. Soon, however, other children begin to be incorporated as characters into their stories. Through this play, a child constructs an awareness of the world as a social arena, and he begins to explore and create his own role within that world. Rules, which began as mandates from above, become social conventions to be negotiated and agreed upon. Play provides the opportunist to experiment with different behaviors in a safe environment in which consequences are reduced to being tattled upon.

Children engaged in active play with each other are learning to communicate with each other. They talk through and act out the rules or parameters of their play. They must, of needs, collaborate with each other in order to maintain the game. As problems arise, they work together to produce potential solutions. Here is the essence of creativity as a means of solving problems. This process also requires critical thinking as the child analyzes the problem, makes connections to similar situations he has experienced and the solutions that worked, and then evaluates the likely success of those potential solutions in this new situation. I’m exhausted just thinking about all of that thinking. The child, however, is happy in his play.

Play is not a reward. Neither is it the opposite of work. It is not something separate from learning. In fact, play is an inextricable part of the learning process for children. How often do we see children take things they are learning and transfer/translate them into a game. “Hey, let’s pretend we’re horses today.” Soon, you see a group of children acting out what they know about horses. Or another group may be using Legos to replicate and extend their thinking; to stretch what they know and how they know it. The point is that play becomes a means of contextualizing and synthesizing learning in a personally meaningful way. It also becomes the place in which children learn to ask what is, perhaps, the most important of all questions: What if? What if our horses could fly? How would that change our game? This question is foundational to innovative thinking and creative problem solving. No less a thinker than Albert Einstein would seem to agree through his quote: “Imagination is more important than knowledge.”

Of course sometimes, play is just play. But even there it serves a valuable role. New ideas and understandings often spring up when we are not focused on anything in particular. I should also note here that not all learning should, or even can be, play. Although it is funny how  often a child will refer to an activity as play when performing a task that I would consider to be work. 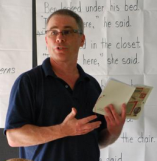 Ed Goulart is a first grade teacher at Mammoth Heights Elementary in Parker, CO. He has been teaching primary aged children for over 20 years. Ed holds an M.Ed. from Lesley University and an Elementary I credential from the American Montessori Foundation. Ed has experience teaching in both public Montessori as well as traditional public schools, and has helped to open 4 different schools in his career.

News and stories that make you feel better after reading.

When the Coffee Kicks in...

Insights and thoughts on Education in "A Brave New World."

Let peace into your mind and out of your lips.

inspiring the youngest learners to believe in themselves

How to Teach Without a Lecture and other fun